Currently in your bag

No hassle, no fuss

How Often Should You Replace Your Underwear

How Often Should You Replace Your Underwear 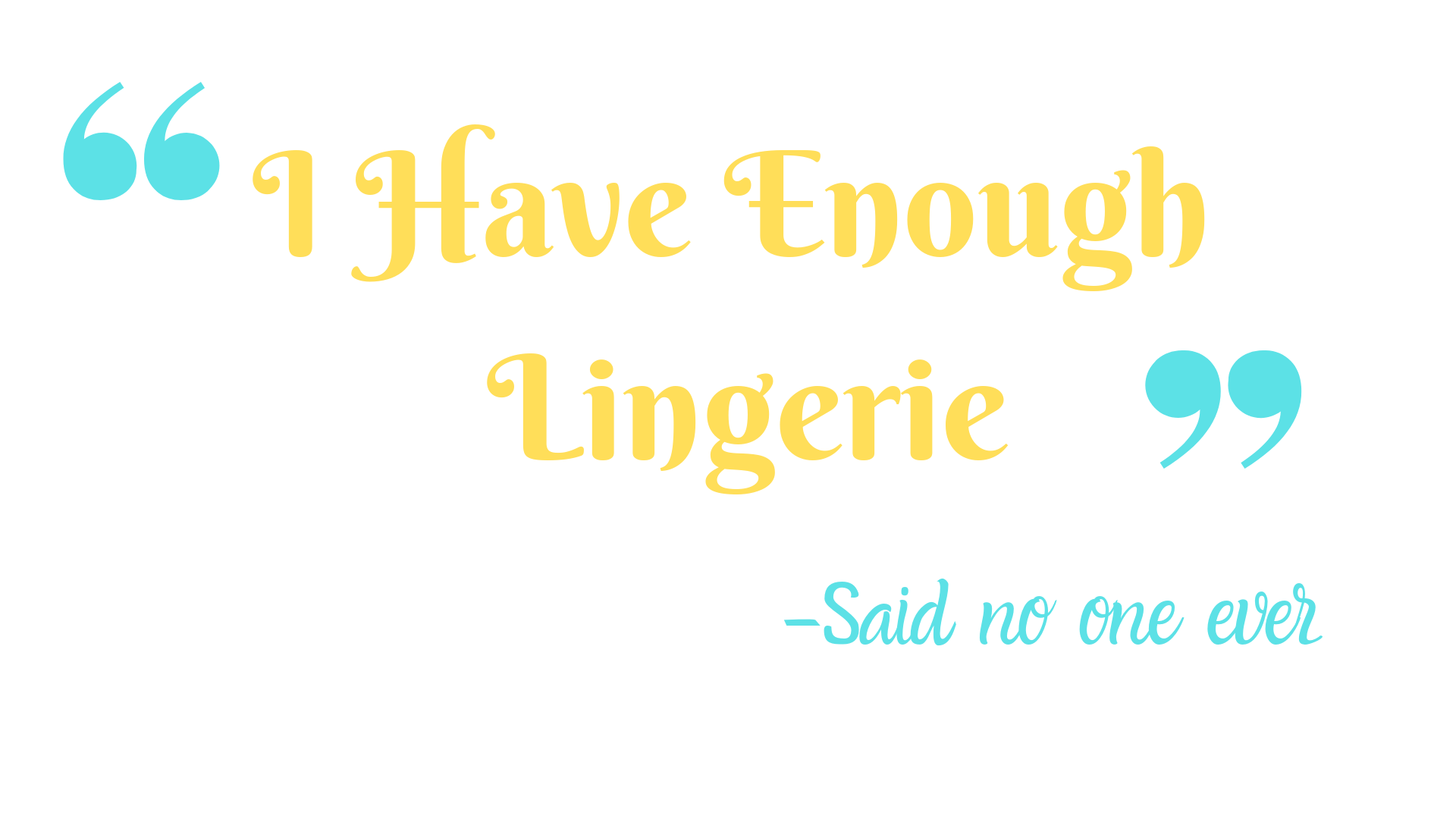 There are two types of women when it comes to buying lingerie, ones that buy endless amounts, and ones that just won't until they're practically falling apart. This is why we have created a guide which looks at how often you should replace your underwear. We've got you covered, from beloved cotton knickers to lacy bras.  There'll be some items of lingerie that you may buy more of than others. For example, It's more common for us to own more undies than bras. With bras being more pricey, we tend to buy them a lot less and make them last a lot longer than we should.

It's obvious when lingerie needs replacing, but just because it's disguised under clothing we seem to neglect it. Often its not how it looks, it's the way it makes you feel, uncomfortable lingerie can be unpleasant. 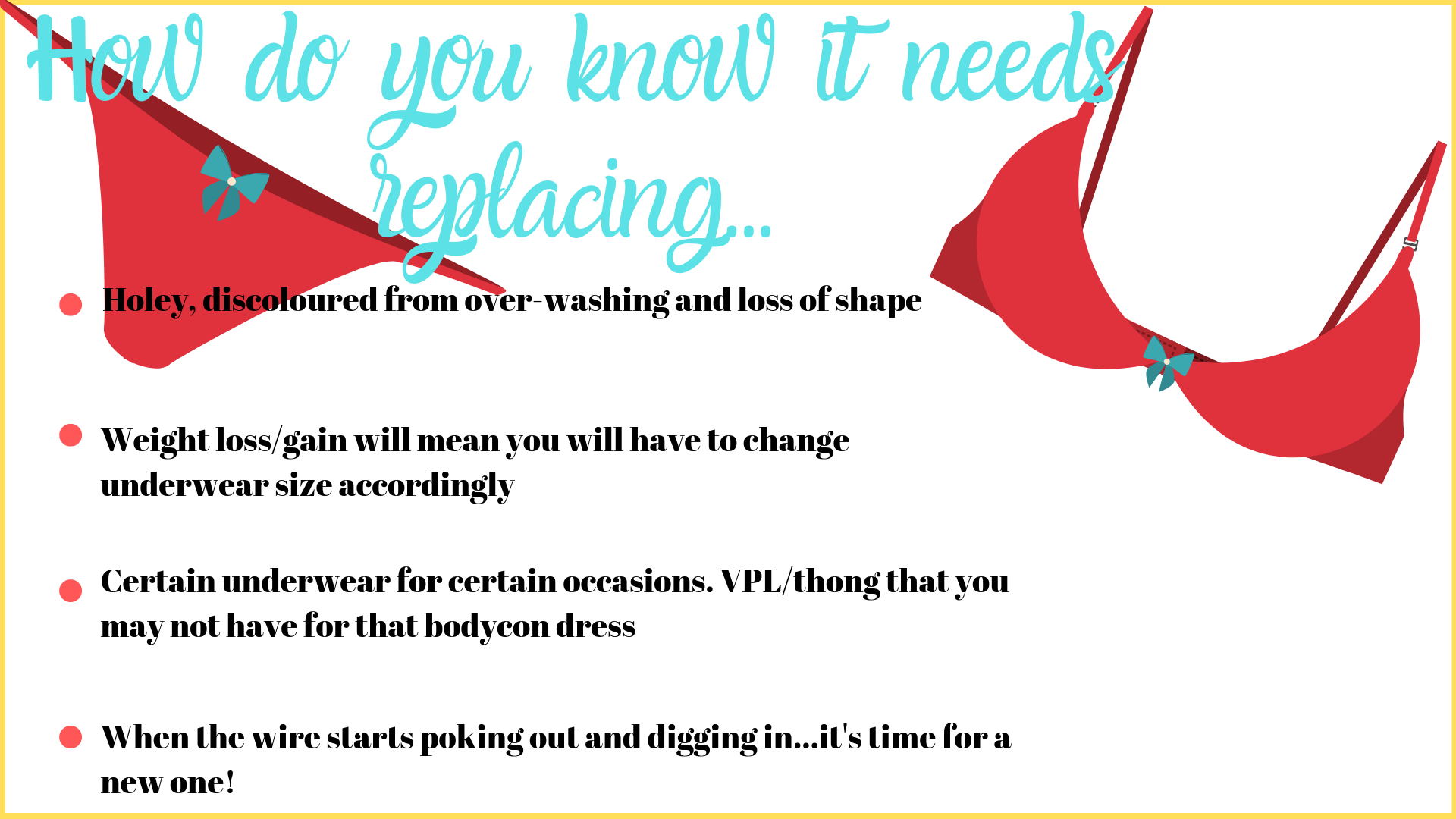 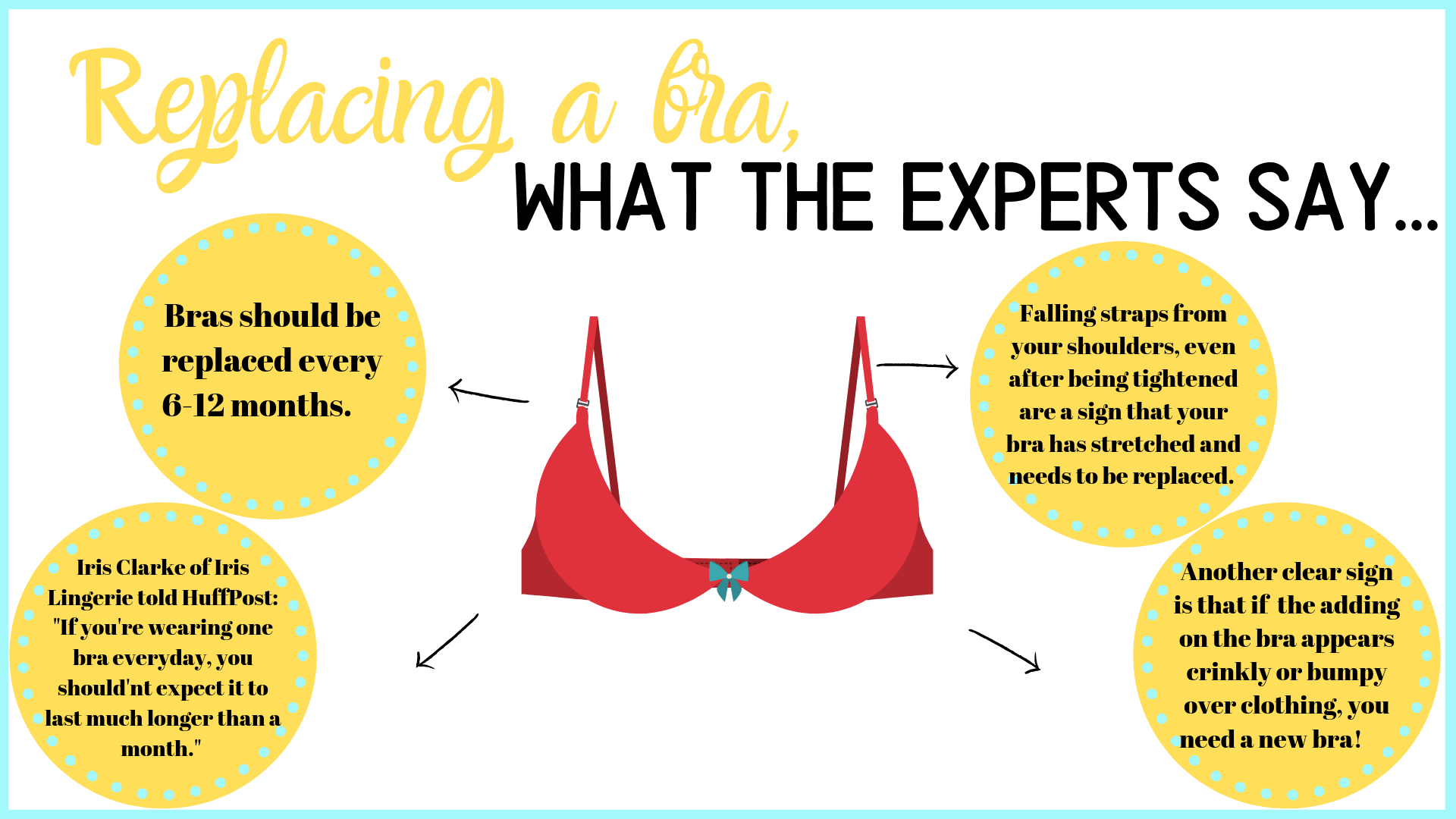 Believe it or not bras have a shelf life and do need replacing at least every 6-12 months. Having said that, if you're taking extra care whilst washing and handling your bra, it could prolong the expiry date. Some elements of needing a new bra can be pretty obvious, such as if the wire starts poking out, it can cause serious discomfort. Or even when a bra loses its shape and the padding has become bumpy, it's definitely time for a new one.

The issue is that most women become too comfortable with their old belongings. How many times have you seen women with their bra straps dangling down their arm, they do nothing or simply just slide it back up and carry on with their day. If you find your bra strap is crawling off your shoulder even after tightening it, it's a clear indication it has stretched out to the max and it's time for another.

Everyone has their own theory on how long their bra lasts, and to be honest a lot of it depends on how well you look after them. 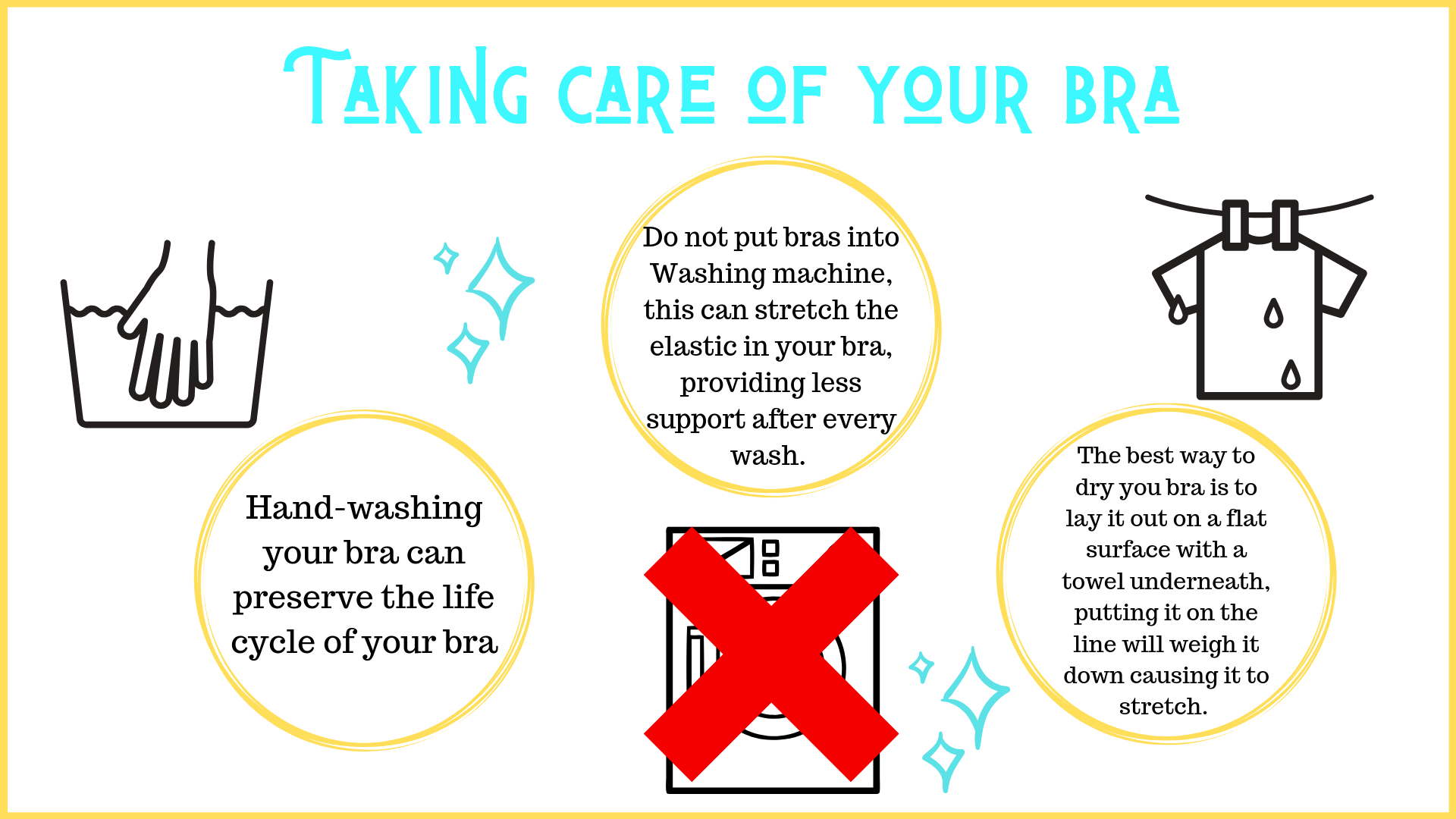 On average you can get about 3-4 wears out of a bra before you'll need to wash it. You should avoid the washing machine when washing your bra. However hand washing bras can be time consuming for us women who run busy lives. As a result we make the mistake of just bunging it in the washing machine! If you're that woman, then the best way to do it is to use a mesh laundry bag. It will help the bra from being damaged, tangled or stretched excessively. But if possible, it is best to hand wash them every time. 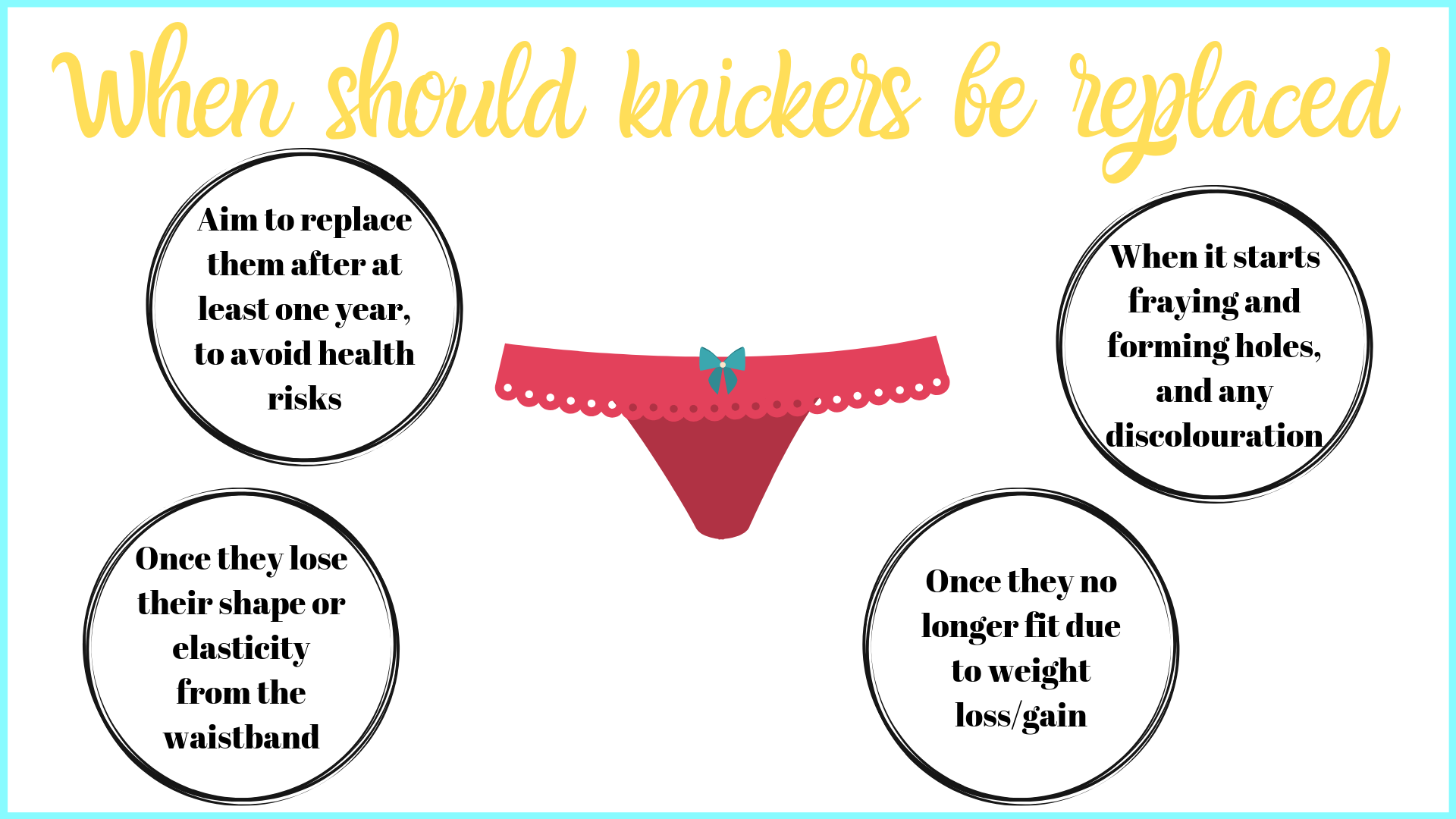 When it comes to underwear, it's not as complicated as there aren't as many components to look after. You should throw away your underwear after one year due to health risks.

Yep, unfortunately washing them just isn't enough and they do need replacing. Wearing old underwear can cause the risk of thrush and UTI (Urinary Tract Infection). Is it really worth the risk?

You'd think they are brand new once washed again, right? Wrong! There's still traces of bacteria, after every wash.

Thrush is very common in women, but it doesn't help when old underwear causes further discomfort. So if you do experience this, it's important to seek medical advise immediately. You can view the symptoms here.

All in all it's on a case by case basis, it could depend on fabric. Cotton is more durable than lace would be. Full briefs may last longer than your average g-string. So it's all about keeping an eye on them and not holding on to something that should no longer be in you lingerie collection.

TOP TIP: Why not go through your lingerie drawer and have a 'spring-clean' every six months, chuck the ones you know you haven't worn in a while and replace with fresh new items. Also make sure you have a variety of different styles to make it a bit more exciting! Lingerie doesn't have to be boring!

How To Care For Your Swimwear

How To Keep Cool During Those Warm Nights

Sign-up to our newsletter to receive 10% OFF your first order!

Can't find what you're looking for?

Maybe this will help...